No clinical work without understanding the basics 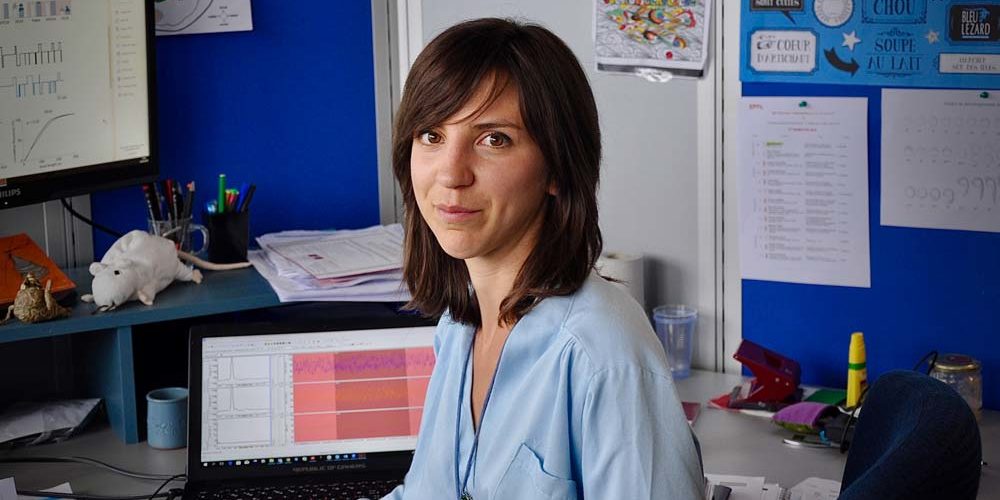 Silvia Monari explains the difficult choice she had to make between medicine and life sciences when deciding on what direction her studies would take. Silvia tells us how she intends to detect biomarkers of disease and possible therapeutic intervention for post-traumatic stress disorder during the course of her thesis.

Silvia Monari is a doctoral student in Carmen Sandi’s laboratory at EPFL. She chose medicine to start her university career. Medical studies in Modena, Italy, are very much geared towards the fundamental sciences, meaning Silvia could immerse herself enthusiastically in life sciences. After an Erasmus program in Münster (Germany), she was selected for a summer research program at the institute of molecular pathology (IMP) in Vienna (Austria), where she was introduced to the world of neuroscience. There, she studied the role of the insular cortex in fear and the reward system. “I learned a great deal of biology there I discovered neuroscience and was fascinated by the scientific community,” says Silvia of her first steps in academic research.

Research rather than a residency

After Silvia returned to Italy for her last—fifth and sixth—years as a medical student, she was rather disappointed. In her opinion, the training was not sufficiently practice-oriented and, unfortunately, was lacking opportunities to combine academic training with research experiences. For example, it lacked an MD-PhD track. However, the opportunity to carry out clinical work towards the end of the medical graduation represented again another important milestone in her trajectory; she was greatly stimulated by this experience. “I enjoy clinical work! As every patient is different, I have to carefully think about the best solution for him or her, considering their psychological, social and physical state.” However, Silvia’s desire to become a scientist was still there, since she considered that having a good fundamental knowledge is essential for improving clinical practice. “I’m really attracted to psychiatry, but before prescribing psychotropic drugs, I’d like to understand how the brain works, and contribute to developing basic knowledge that can inspire the development of novel treatments”. It was for this reason that Silvia decided to do a PhD rather than embark on a medical residency.

It was a tricky decision to take, continues Silvia, given that research is not the classical path for a medical doctor. Above all, my strong desire to carry out translational research was not easy to satisfy. “Most of the time, the clinicians are on one side, the fundamental researchers on the other, and there’s no one to make the connection.” The young researcher was amazed, therefore, to find out that Synapsy existed. She applied to two affiliated laboratories and was accepted by Carmen Sandi in 2016 to start a project on stress.

Stress is a subject that particularly speaks to Silvia since it concerns all of society, she says. “We’re all stressed and that affects our physiology. It’s a system that’s been thoroughly preserved throughout the evolution of our species, but which has not evolved as quickly as society. In addition, stress has huge consequences for the development of psychopathologies. And that’s why it’s important to study it properly.” It is also an area in which Silvia would like to stay when it comes to her future career.

Glucocorticoids to counter the effects of stress

Silvia’s thesis focuses on the intra-individual variability of the stress response. In humans, low blood cortisol levels are seen in people with post-traumatic stress disorder (PTSD), but the cause and effect link has not been explained.

To shed light on this link, Silvia is working on an animal model of vulnerability to PTSD. She uses strains of rats divided into three groups based on their different corticosteroid levels—the equivalent of human cortisol—in response to stress. She observed that rats with low glucocorticoid responsiveness remain frightened for longer than others during fear learning and extinction, an observation that was linked to a small hippocampi. Given that these two aspects are combined in people with PTSD, Silvia is using this animal model to ascertaining whether a small hippocampus size can provide vulnerability to develop trauma-related disorders. At the same time, she is trying to validate a causative link between low corticosterone and impaired fear extinction and assessing whether administering glucocorticoids could be efficient to treat PTSD. Moreover, she is also using this animal model to get further insights on the link between sleep disturbances—particularly in REM sleep—and PTSD pathophysiology. As this type of sleep is important in the formation of emotional memories, and is largely modulated by glucocorticoid, Silvia is trying to determine whether an external supply of corticosteroids can restore normal sleep and thus ameliorating PTSD symptomatology.