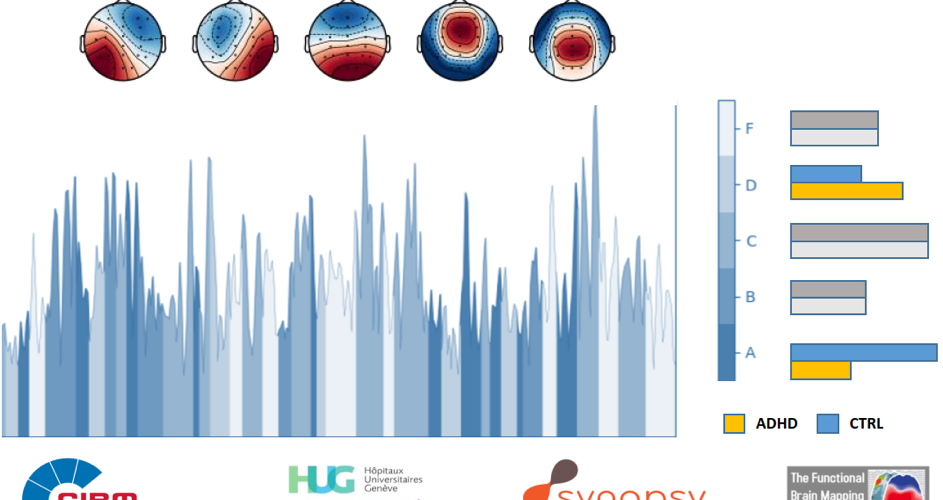 By analysing the fluctuations of different cerebral states, neuroscientists at Synapsy have identified a new neurological marker for attention deficit disorder with or without hyperactivity.

Adult diagnosis of attention deficit hyperactive disorder (ADHD) is based on inattention and impulsivity criteria. Just as the causes of ADHD have a biological basis, the discovery of biomarkers could help with diagnosing and treating this disorder that sometimes has serious consequences for the affected person’s safety and their family, professional and social life. Supported by the national research centre Synapsy, neuroscientists from University of Geneva (UNIGE), the Centre for Biomedical Imaging (CIBM) and the University Hospital of Geneva (HUG) focused their attention on a new electroencephalographic approach called microstates to identify ADHD’s neurological signatures. The microstates technique is used to look at the combined spatial and temporal aspects of cerebral activity. Using this technique, the research team discovered that a certain cerebral activity state associated with sleep and attention lasted longer among people with ADHD. The results,  published in the journal Biological Psychiatry: Cognitive Neuroscience and Neuroimaging,  provide evidence of a more robust ADHD biomarker and thus contribute towards helping psychiatry become a more precise medical discipline.

ADHD affects five per cent of adults, making it one of the most common psychological disorders. Current clinical diagnosis is based only on questionnaires that focus mainly on the inattention and impulsivity symptoms. However, neuroscientists speculate that ADHD’s causes, while still not well known, have a biological and genetic basis, suggesting that there may exist biomarkers that could help in its diagnosis. This was the scope of this new study supported by Synapsy, a research centre that has combined psychiatry and the neurosciences over the past twelve years to understand the neural basis of different psychological disorders in the hope of creating better means for diagnosing and treating them.

Searching for a better investigative tool

The study of the human brain is a difficult endeavour because we cannot directly access the brain to look at its cellular and molecular mechanisms. Hence, non-invasive investigative methods such as brain scans or electroencephalograms (EEG) are used. The latter test uses a network of electrode sensors placed on the subject’s scalp to measure the electrical fields generated by large-scale neural networks. Recent studies have revealed abnormal EEG activity among patients affected by ADHD, suggesting that abnormal cerebral development may be the cause of ADHD.

Unfortunately, the data vary too much from one study to another, making them unreliable markers for ADHD. “These variations are due either to the wide heterogeneity of ADHD’s causes or to the fact that traditional EEG analyses are not a good tool for looking into the matter because they do not take into account the spatio-temporal aspects of cerebral states,” said Tomas Ros, researcher at the Department of Psychiatry and Neuroscience at the UNIGE Faculty of Medicine.

Brainactivity fluctuates successively from one state to another while at rest, manifesting different spatial configurations in the EEG’s electrical field. Neuroscientists speak most often of five “micro” states or main configurations, lettered from A to E. These different states remain stable for about one hundred milliseconds and shift from one to the other, hence their name microstates. An EEG can detect them, and their frequency, duration and order of appearance can be extracted from the recordings.

Using this approach, researchers found differences between adult patients with and without ADHD. The cerebral microstate A appears to have ashorter duration among patients diagnosed with ADHD. “By comparing this observation with the data from clinical questionnaires, we observed that this state is inversely correlated to symptoms of inattention,” said Victor Férat, researcher at the Functional Brain Mapping Laboratory and first author of the study. Interestingly, the team observed that microstate D had a longer duration in patients with ADHD ,and that this was associated with increased sleep disturbance, a typical symptom of ADHD.

Just as scientific findings must be reproduced in the field, the research team then repeated their analyses with a separate cohort of patients to verify the generalizability of their findings. Through a collaboration with Prof. Martijn Arns, head of the Brainclinics institute in The Netherlands, the first collection of data from sixty-six patients diagnosed with ADHD and sixty-six people in the control group was validated by a separate cohort of twenty-two ADHD patients and twenty-two control subjects, recorded at HUG by the ADHD unit headed by Prof. Nader Perroud, co-author of the study. “In this case, we replicated the results concerning microstate D, but not the those of microstate A”, Victor Férat said.

Microstate D thus appears to be a replicable brain biomarker for ADHD. Moreover, it seems to be associated with sleep disorder in this population, a key aspect of ADHD. These findings thus reveal a valuable tool for research, diagnosis and even treatment. “This biomarker could be monitored in real-time during brain-training with neurofeedback, for example” Tomas Ros said enthusiastically (see the previous press release).

The five cerebral microstates measured by an EEG. The cerebral microstate D is the most pronounced among people with ADHD and could be used as a non-invasive functional biomarker. This is a notable advance for assessing this very common and diverse psychiatric disorder. @Ros/UNIGE/HUG/CIBM