SHANK3 controls maturation of social reward circuits in the VTA 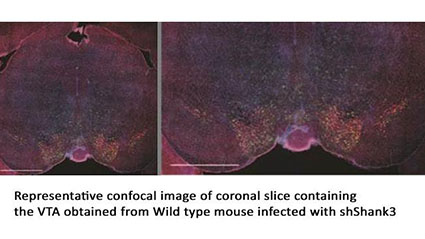 The autism spectrum disorders are a heterogeneous group of neurodevelopmental disorders whose main characteristic alterations in social communication, restricted interests and repetitive behaviors.

If the assumptions to identify alterations in brain circuits that could be responsible for autism disorders are numerous, recent research brought up the hypothesis of an involvement of the reward system in these disorders. That brain system, has the role to motivate into taking actions in order to get a reward such as ‘natural rewards’ like food, but also into social interactions. A malfunction of the reward system, and therefore the motivation to interact socially, could be the basis of the alteration of the typical social behavior of autistic disorder.

But what are the neurobiological mechanisms underlying some social dysfunction?
Would it be possible to identify therapeutic strategies to address these anomalies? It is these questions that neuroscientists from the universities of Lausanne, Geneva and Bordeaux, under the direction of Professor Camilla Bellone, responded.

Results, to read in Nature Neuroscience, demonstrate for the first time that the reward system is involved in autism. Ultimately, they could help detect the disease early, observing through brain imaging of possible dysfunction in circuits comprising the rewards system.