Back to the sources of neural diversity 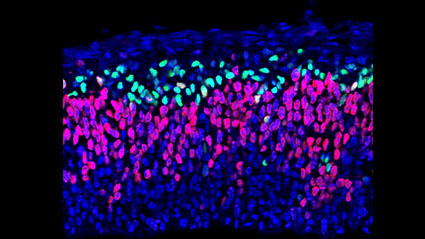 By deciphering the genetic programs of neurons of the cerebral cortex, Swiss and Belgian researchers unravel the mechanisms controlling the genesis of cells in one of the most essential parts of our brain.

The cortex is a complex brain region that allows us to perceive the world and interact with objects and beings around us. The diversity of the tasks it can perform is reflected in the diversity of the neurons that compose it. Indeed, several dozen cells types with distinct functions come together during embryogenesis to form the countless circuits that shape the basis of our thoughts and actions.

These neurons are spawned from progenitor stem cells, which divide and produce these different cell types one after the other. But how do these progenitors manage to generate specific types of neurons in the right place at the right time? By identifying the genetic scenarios at work, researchers from the universities of Geneva (UNIGE), Lausanne (UNIL), in Switzerland, and Liège (ULiège), in Belgium, lift the veil on the birth of cells that make up brain circuits. These results, to be discovered in the journal Science, also provide a deeper understanding of the origin of neurodevelopmental disorders.

During embryogenesis, different types of neurons are generated by progenitor cells present in the depths of the brain; these neurons then assemble to form circuits that control movement or perception. “We had already studied the bioelectrical properties of progenitors in order to identify subtle process governing cell differentiation,” explains Denis Jabaudon, professor at the Department of Basic Neurosciences at UNIGE Faculty of Medicine, who led this work. “But what about genetics? Which genes control the delicate balance between innate and acquired programs? This is what we wanted to understand here.” Indeed, newborn neurons not only inherit genetic material from their “mother” cell, but also develop their own genetic programs in interaction with the environment, during a maturation process that ultimately leads to connecting into functional circuits.

Together with Ludovic Telley, professor at UNIL Faculty of Medicine and Biology, and Gulistan Agirman, doctoral student at GIGA-Stem Cells at ULiège, Denis Jabaudon and his team have systematically followed the genes expressed by successive generations of progenitors and their daughter cells, with a very high temporal resolution. Taking advantage of a technology developed at UNIGE to isolate cortical cells born at a given time, the researchers were able to reconstruct the genetic scenario by which progenitors give birth to neurons of different types over time. “We then developed mathematical algorithms to reconstruct the generation of neurons,” says Ludovic Telley. “This allowed us to observe the essential role of certain genes transmitted by mother progenitor cells.” Indeed, if, at the very beginning, the progenitors are not very sensitive to environmental signals, they become more and more so over time. These temporal patterns of gene expression are then transmitted by the progenitors to their offspring. “As proof, by artificially modifying these time marks in the progenitors, we have succeeded in changing the identity of daughter neurons and accelerating the speed of the developmental scenario,” adds Gulistan Agirman.

The origin of neurodevelopmental disorders?

These studies, based on a mouse model, also apply to human beings: by studying human biological data, the team was able to show that time marks and their genetic transmission mechanism were conserved during evolution. This important discovery highlights the importance of temporal genes in the generation of cerebral cortex circuits, and identifies genetic programs whose alteration could contribute to neurodevelopmental diseases. In addition, this study may identify molecular recipes to be applied to generate different types of neurons. It may thus one day contribute to the directed generation of defined types of neurons from patients’ own stem cells.