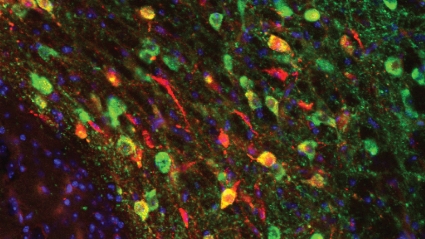 Dopaminergic neurons of the VTA (green).
Virus-infected neurons that can be inhibited to assess their effects on social behavior through chemogenetic approaches are in red.
The level of infected dopamine neuron is about 50% (yellow).

Highlight from the Bellone’s Lab

Disturbed social relationships are an autistic trait. Dopaminergic neurons are implicated in these highly-complex interactions.

Social interactions are one of the difficulties experienced by people suffering from autism spectrum disorders. To get to the root of this social disorder, the laboratory led by the researcher Camilla Bellone at the University of Geneva’s Medical Center is trying to understand which neural networks are involved. Social interactions are considered highly complex because the behavior of other people is difficult to predict, and our brains have to continually adapt to the situation by making decisions.

Given that dopaminergic neurons are known to be involved in decision-making because of their ability to perform what neuroscientists call “reward prediction error”, they are an interesting avenue of exploration for the Geneva research team.

But what exactly is reward prediction error? “When a given signal is systematically associated with a reward, the dopaminergic neurons react as soon as the signal appears and not at the moment of the reward,” explains Clément Prévost-Solié, Camilla Bellone’s PhD student. In short, it is the ability to recognize a particular situation, and it could be useful for adapting our behavior towards others. “For instance,” continues Prévost-Solié, “I’m not going to behave the same way with you during this interview as with Camilla Bellone when we’re talking about my research results. In a way, it’s this understanding of the situation that is encoded in the dopaminergic neurons”.

The fact that dopaminergic neurons play a role in social behavior was demonstrated in 2014 in a study published by the American researcher Karl Deisseroth, who showed that modulating dopaminergic activity could influence social interactions in mice. The researchers still need to determine whether the neurons are involved in autism and, if that is the case, they will have to ascertain the details of the synaptic pathways involved. This is the task that Clément focused on during his thesis supervised by Bellone, concentrating on the ventral tegmental area (VTA) of the brain. This is a dopaminergic nucleus with a beam projecting towards the nucleus accumbens, two structures known to play important roles in decision-making, addiction and other processes that modify behavior.

The Geneva-based researchers, handsomely equipped with optogenetic and chemogenetic molecular equipment, assessed the effects of a specific modulation of VTA dopaminergic neurons on social behavior. Using this approach, the scientis were able to demonstrate that this category of neurons was indeed involved in social learning, and more specifically in social novelty. As Clément points out: “Changes in the dopaminergic synapse occur when a mouse interacts with a new stimulus. These changes are persistent only when the stimulus is social”.

Based on these observations, the researchers assessed whether the VTA dopaminergic pathways were involved in an autistic animal model. Prévost-Solié and his colleagues focused on the Neuroligin-3 model, a post-synaptic molecule that is important for the structure of the synapse known for its involvement in autism. Thanks to a collaboration with former Synapsy member Peter Scheiffele, the scientists either used a mouse in which the Neuroligin-3 gene was absent from the entire body or a virus allowing the downregulation of the Neuroligin-3 gene only in the VTA dopaminergic neurons. A social learning deficit was observed in both models.

On the other hand, only the specific downregulation leads to social shortcomings without associated deficits, such as motor or planning deficits. “Our results demonstrate the specific nature of the involvement of VTA dopaminergic neurons in social behaviors and autism!” exclaims Clément.
All that remains for Camilla Bellone’s research team is to demonstrate that reward prediction error –the true digital fingerprint of dopaminergic neurons– occurs during a social interaction. This would show that the latter is a kind of social prediction error and would irreversibly confirm the social role of dopamine and its involvement in autism.

Prévost-Solié is currently working hard on this area and the results, he points out, are promising. 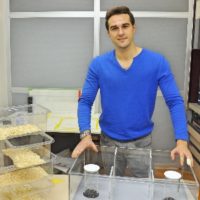 Clément Prévost-Solié is driven by the need to understand human beings in their entirety, from the body to the mind via our molecules.

He first decided to take a comprehensive look at the forehead during his studies. But, when Clément couldn’t find a tailor-made training, he signed up for a course in biology and psychology, studying the subjects in parallel in two different institutions in Paris.

What was it like wearing these two hats? “The experience of human beings is very useful for fundamental neuroscience, especially when the goal is to find treatments”. It was only natural that this choice led Clément to Synapsy and Camilla Bellone’s laboratory at UNIGE, where he is doing a doctorate in neuroscience on autistic animal models.

Clément will defend his thesis in early 2019, after which he plans to explore private research.