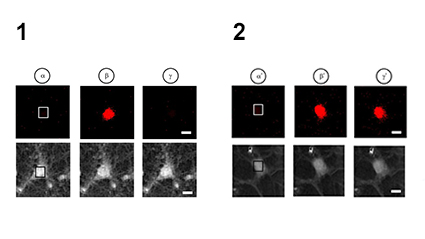 NMDA receptors are involved in several aspects of fundamental brain functions, as well as in a variety of neurological disorders. In its last study published in the Nature series “Scientific Report”, the laboratory of Pierre Magistretti reveals that L-Lactate is a key player in this dual action. Researchers identified in which physiological conditions L-Lactate can either potentiate or protect neuronal networks.

L-Lactate has long been considered by researchers as a waste product of glucose metabolism with no specific functions in the brain. This view has, however, changed during the past decades, thanks to the extensive work of Pierre Magistretti and his colleagues. L-Lactate was first considered as a way to feed hungry neurons through the concept of the Astrocyte-Neuron Lactate Shuttle, where astrocyte-derived L-Lactate acts as an energy substrate to meet the increased energy demands of neurons during neuronal activity. Recently, Pierre Magistretti and his colleagues have shown that L-Lactate could also acts as a signaling molecule for neuronal plasticity and Long-Term Memory formation as well as for neuroprotection. These two sets of properties of L-Lactate, namely neuroplasticity and neuroprotection, may appear at first analysis contradictory since they involve the same neuronal receptor: NMDAR. Indeed, the positive modulation of NMDARs by L-Lactate associated with neuroplasticity seems hard to reconcile with the neuroprotective action of L-Lactate against NMDAR-mediated excitotoxicity.

To address this apparent paradox, Pascal Jourdain, Pierre Magistretti and their colleagues performed a series of experiments providing strong evidence that L-Lactate is clearly involved in two distinct and independent pathways defined as NMDAR-mediated potentiation pathways and a neuroprotective pathway. The prevalence of each one depends on the strength of the glutamatergic stimulus, resolving this apparent paradox. According to the Magistretti’s group, they are no or few molecules with these dual properties which make L-Lactate a potentially attractive candidate for clinical and pharmacological research in particular for nervous system pathologies.