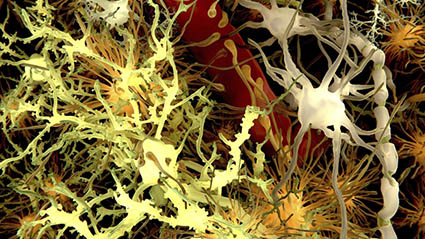 Scientists at EPFL, KAUST and UCL have created the first computer model of the metabolic coupling between neuron and glia, an essential feature of brain function. Confirming previous experimental data, the model is now being integrated into the brain modeling efforts developed by the Blue Brain Project.

The brain uses glucose for energy in a very efficient manner. However, given the brain’s structure and metabolic constraints, the way it achieves this efficiency is a mystery. The key is the little-understood relationship between neurons, blood vessels and the other cells of the brain, the glia. Scientists at EPFL and the King Abdullah University of Science and Technology (KAUST) have now developed the first computer model of this relationship, which has successfully matched previous experimental in vivo and in vitro data in the field. The model, published in PLOS Computational Biology, is now being integrated into the detailed brain model of the Blue Brain Project.

The brain is more than neurons passing information between them. Over half of the brain is actually composed by glial cells, which support and insulate neurons, supply them with energy substrates, protect them from pathogens and even clear out dead neurons from the brain. In fact, glial cells, neurons and the brain’s blood vessels form a functional unit, the neuron-glia-vascular unit (NGV) that regulates the brain’s energy management.

A team led by Pierre Magistretti (EPFL, KAUST), working with Renaud Jolivet (University College London), has now developed a detailed computer model that accurately captures the dynamics of this relationship. Specifically, the model shows how glucose is shuttled between the three elements of the unit to produce energy for activated neurons.

Previous experiments from Magistretti’s group show that glucose flows from a type of glia cells called “astrocytes” to neurons in the form of lactate. However, some theoretical studies have proposed that lactate could go the other way – from neurons to astrocytes. This has major implications for our understanding of brain energy metabolism.

The model has now confirmed in quantitative terms that lactate flows from astrocytes to neurons. It is also the first such model to successfully simulate the actual timeframe of this process, a breakthrough that provides a measurable picture of how neurons and glial cells tightly coordinate brain energy metabolism.

A better understanding of the metabolic relationships between neurons and glia has also important implications for understanding the signals detected with functional brain imaging techniques, such as fMRI and PET, which monitor glucose utilization, blood flow or oxygen consumption changes that occur in register with neuronal activity.

“This is the first time-dependent and multi-scale model of the neuron-glia-blood vessel that accurately reflects experimental observations from multiple cells types and organisms,” says Pierre Magistretti. The model is now being integrated with the accurate brain model being developed by the Blue Brain Project at EPFL. “By adding the extra layer of neuron-glial dynamics, we can take a step toward more accurately modeling the real working of the brain.”

This work represents a collaboration of EPFL with the University College London, and King Abdullah University of Science and Technology (KAUST). It was partly supported by a grant from KAUST for a collaboration between the Blue Brain Project at EPFL and the KAUST-EPFL Alliance for Neuro-inspired High Performance Computing.