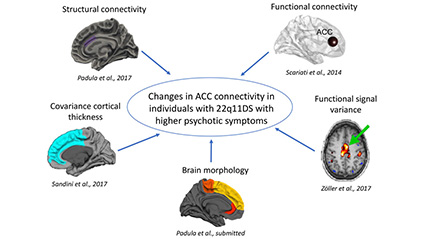 One in every 100 children develops schizophrenia in adulthood. But how can we know which children? Brain-imaging studies performed on the 22q11ds at-risk population provide some preliminary answers.

In Switzerland, as elsewhere, one per cent of the general population develops schizophrenia around the age of 20. The ability to predict which children are likely to develop the illness on the basis of neurobiological, genetic, psychological and cognitive phenotypes would help further our understanding of the pathological mechanisms and ensure early patient care. It would also make it possible to assess the effectiveness of new treatments before the illness occurs. In this context, brain imaging and other quantitative neuro-functional assessment tools (EEG, Eye tracking, etc.) is the preferred investigative technique for identifying biomarkers of the illness.

The prevalence of 1%, although significant in epidemiological terms, is not high enough to make it easy to follow the intellectual and cerebral development of future schizophrenics. Stephan Eliez points out that even the cohort supplied by Dunedin (the famous New Zealand study) – 1,037 individuals followed from the ages of 7 to 30 – only gave rise to twenty schizophrenics. “Obviously, it’s not viable statistically,” says Eliez. The solution lies in analyzing an at-risk population to increase the probabilities. 30% of people carrying the 22q11 microdeletion chromosome abnormality (22q11DS) become schizophrenic between 14 and 23 years of age, and it is on this basis that Eliez made the logical decision to choose this at-risk population when setting up in Geneva in 2001. Today, thanks to his colossal recruitment work via Swiss, Belgian, French, English and Irish patient associations, Eliez’s 22q11DS cohort is highly conducive to studying schizophrenia.

When the cohort was being established, the diagnostic tools consisted of IQ tests and a clinical interview. “We needed tools to characterize the illness as close as possible to the neurodevelopmental phenotype,” explains Eliez. It follows that, over the last 15 years, the cohort has benefited from the implementation of new technologies by his research group. Eliez, supported by Marie Schaer (his student at the time), introduced (inter alia) eye-tracking and a new approach to neuro-imaging – the gyrification index – to assess the thickness, volume, area and cerebral folding in an integrated manner. Eliez explains that these tools are a real asset for the cohort. In addition, the longitudinal nature of the study makes it unique in the world since brain-imaging measurements have been conducted up to five times on some patients, from the age of 4 to 30 years.

The heterogeneity of 22q11

As such were the conditions in which the young biologist Maria Padula began her thesis under the direction of Eliez and Schaer in 2013. Padula’s initial goal was to use structural and functional magnetic resonance imaging (fMRI) together with diffusion tensor imaging (DTI) to determine whether predictors of schizophrenia exist during development. Four years later – and following Padula’s successful PhD thesis last September – the young doctor in neuroscience has ten publications to her name (two of which are forthcoming), and has largely succeeded in identifying cognitive and structural biomarkers for schizophrenia. Despite this impressive record, Padula has retained an exemplary modesty, declaring that she “benefited from the cohort and techniques that were already in place as well as my skilled and talented colleagues”.

Despite appearances, not everything was easy for this young researcher at the outset. Her initial plan was to compare 22q11DS patients with different symptomatic profiles. Indeed, the 22q11 patient population is highly heterogeneous. In addition, when comparing 22q11DS patients with controls, several confounds need to be taken under consideration, in particular their intellectual capacities. However, these analyses could not be conducted during the first phase of her project, as the sample size was not big enough for such intra-group comparisons.  Therefore, the initial comparisons were conducted between 22q11DS patients and healthy controls. “As soon as we had the adequate sample, we quickly turned to a comparison between 22q11DS patient sub-groups,” says Padula. The 22q11 population was divided into two categories: patients with low symptoms and patients with high symptoms, that have a greater risk of developing schizophrenia. It is this categorization that has enabled her project to progress so rapidly. 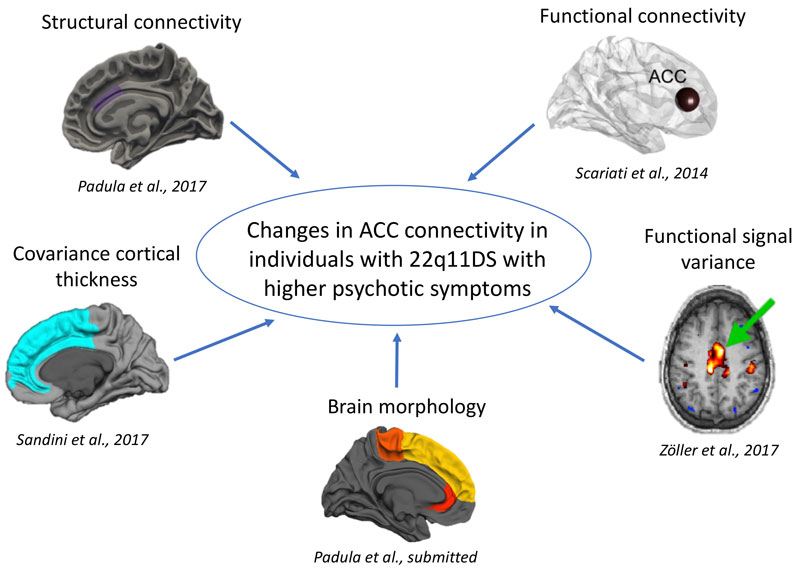 At the structural level, Padula and Eliez’s team have been able to demonstrate that 22q11 patients with positive psychotic symptoms – hallucinations and delusions – have an intensified reduction in cortical thickness. For patients with negative psychotic symptoms – less motivation and social engagement – the situation is not so clear, but a defect in the cerebral fold may be detectable during the child’s development.

Furthermore, connectivity defects expressed by hyperactivity in the anterior cingulate cortex in 22q11DS patients with positive psychotic symptoms were also identified. The functional imaging results correlate with the EEG data collected by the team led by Christoph Michel, which were carried out on the same cohort. Finally – and remarkably – the fundamental work performed by Alan Carleton‘s and Pico Caroni‘s groups has demonstrated a dysfunction in the inhibitory neurons in 22q11 mice, which corroborates the hyper connectivity observed in humans by Padula’s research. It is clear, therefore, that they constitute the cellular mechanistic basis of schizophrenia.

The anterior cingulate cortex is a strong candidate marker of schizophrenia. But Synapsy’s researchers and the Eliez group do not intend to stop there: their aim is to take advantage of this discovery to devise new treatments. The idea is to inhibit this region through intracranial stimulation, work that will be carried out during NCCR Synapsy’s third phase.