A psychologist in a clinical research team 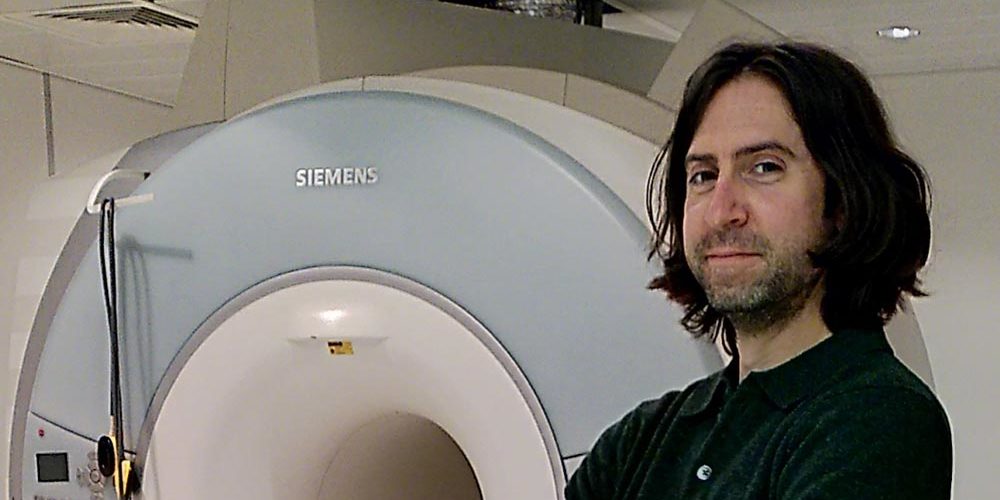 Ryan Murray’s work within Synapsy WP#5 focuses on measuring brain reactivity to and recovery from psychosocial stress within clinical patients and healthy controls. He talked to us about his role as a psychologist in a clinical research group and his projects.

After psychology-related studies, research and practice in Geneva over a 10-year period, Ryan earned a Master of Science in Neuroscience in 2012 from the University of Geneva, which he holds in addition to complementary bachelor and master degrees in Psychology from the UNIGE. He received his doctorate in Psychology in 2018, from the Swiss Centre for Affective Sciences in Geneva, working on mapping the neural correlates of emotion processing.
Ryan is currently working as a postdoc researcher and data analyst in Camille Piguet’s team at UNIGE/HUG, where his principal activity is acquiring and analyzing fMRI data for both patients and healthy controls in response to psychosocial stress.

The study uses a modified version of the MIST method (see box), which is a codified way to elicit a small but discernable psychological stress in patients while they are in the MRI scanner. The intent is to get a picture of what is occurring within the brain during the performance of stress-inducing tasks.

So far, this task has been applied to more than 200 subjects, healthy controls, as well as bipolar, ADHD and borderline personality disorders patients. Initial results in healthy subjects have been published (Murray et al. Journal of Affective Disorders, 2020), illustrating the significant influence of maladaptive emotion regulation traits on brain activity within regions associated with self-regulation and stress coping. The next paper will most probably concern borderline and bipolar patients, and more specifically their offspring: the initial hypothesis was that offspring of psychiatric patients presenting increased stress reactivity and emotion dysregulation would show altered patterns during this task, that could represent a marker of vulnerability.
Ryan’s long-standing interest in psychological stress in children and adolescents is kindled by the implications of data seen by the team. The team is discussing interpretations of the clinical implications, how the findings can relate to different types of mood disorders —and specifically bipolar and borderline personality disorders— and what might be potential avenues for clinical intervention, such as mindfulness training.

Role of the MRI operator

Ryan is a certified MRI operator and can capture data in connection with any number of enquiries.

The role of the fMRI operator is first, and foremost, to capture reliable data from a monitoring of MRI scans, both structural and functional, of the brain during the performance of specific tasks.
Ryan explains that while MRI operators are not neurologists —they don’t diagnose— they do know brains. They have a responsibility to scrutinize structural images of brains and to signal any abnormalities that might be apparent. They will have seen MRIs of hundreds of brains and can understand what might be significant. ●

Stress is elicited by having participants complete five blocks of arithmetical calculations of varying difficulty under time constraints. In between blocks, they are given feedback on the results of their calculations and on how they compare to their (fictive) peers.

This team introduced two innovations to the MIST. The first is the inclusion of a recovery period of 90 seconds immediately after the feedback is given, during which neural stress recovery can be observed. The second innovation is the addition of a positive feedback (previous standards included negative and neutral feedback only) on the idea that this can itself be a source of stress in people uncomfortable with compliments or experiencing the fear of future expectations.