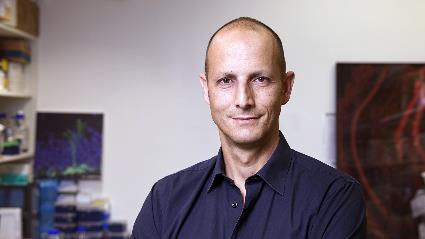 “Adult neurogenesis : at the root of psychiatric illnesses”

With a background in fundamental neuroscience, Nicolas Toni’s research may be successful in detecting a link between neurogenesis and psychiatric illnesses.

Memory is an area that has always fascinated Nicolas Toni: it gives us our identity as human beings, says Nicolas, because it’s the cornerstone of how knowledge is transmitted, helping us compensate for our physical disabilities compared to other species. And it’s all possible thanks to the hippocampus, the brain structure that has always been at the core of Nicolas’s investigations – during his PhD on synaptic plasticity with Dominique Muller, his post-doctorate work on adult neurogenesis in Fred Gage’s laboratory, his stints in private industry and in his current position as associate professor at the UNIL-CHUV Center for Psychiatric Neuroscience.

Nicolas’s research is now focusing on trying to understand how neurogenesis is involved in depression. His investigations are centered on the regulatory mechanisms of adult neurogenesis by the cellular and molecular environment (the neurogenic niche) of the dentate gyrus. It’s an area that is of particular interest to Synapsy: many psychiatric illnesses are linked to a reduction in the volume of the hippocampus and neurogenesis. “No one knows whether these drops are collateral damage or whether they’re causal”, explains Nicolas. “On the basis of what we do know about hippocampal function, it’s easy to imagine that they contribute to pathological phenotypes.”  By contrast, the positive role of new neurons on memory and depression is clearly established. Since many mental illnesses have depressive components and involve memory loss, it is possible that impaired adult neurogenesis may be an aggravating factor.

The neurogenic niche as a biomarker

Nicolas’s team is currently setting up a blood test to identify the molecular mechanisms that regulate adult neurogenesis via circulating factors. His laboratory has found that the dentate gyrus’s neural stem cells are in direct contact with the blood vessels, suggesting that they could be regulated by the neurovascular niche. The researchers plan to identify these molecules by collecting serum and testing it on stem cells in vitro. “It’s a way not just to understand the regulation of the stem cells but also to devise a test that could signal a neuropathological state”, says Nicolas. The test is at the validation stage in animals before being trialed on patients in Martin Preisig’s cohort. Nicolas is thrilled with this collaboration and his close links with Synapsy: “The Synapsy approach is an inspiration that helps us foster our own models!”.