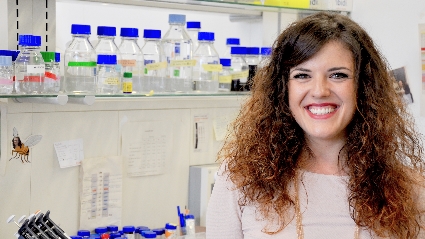 Highlight from the Bagni’s Lab

Genes encoding for proteins involved in synaptic protein synthesis seem to contribute to the development of Autism Spectrum Disorders. They are now suspected as early biomarkers.

Eleonora Rosina, a PhD student in Claudia Bagni’s laboratory, is looking for molecules that may represent a first sign of Autism Spectrum Disorders (ASD). The latter are recognized as heterogeneous neurodevelopmental disorders characterized by impaired social interaction and communication, as well as restricted and repetitive behaviours. “The molecular mechanisms responsible for autistic behaviour remain largely unknown,” says Eleonora. Despite this fact, several leads exist.

Since many monogenic diseases associated with autism are caused by mutations that regulate protein synthesis, Claudia Bagni’s team believes that a dysfunction in protein synthesis could contribute to the pathogenesis of ASDs and other intellectual disabilities with similar clinical characteristics. Eleonora Rosina points out that, particularly, the mTOR and MAPK signalling pathways are of interest to her laboratory, since they are known to regulate synaptogenesis and local protein synthesis. In addition, several studies have demonstrated their involvement in syndromic ASD, i.e., conditions where autism is accompanied with other symptoms. However, very little is known about their association with non-syndromic (or idiopathic) ASDs.

In order to identify a molecular signature in subjects with mild and severe idiopathic autism, Claudia Bagni’s group undertook an analysis of the expression of key components of these two signaling pathways. For this purpose, they teamed up with Professor Paolo Curatolo, past President of the International Child Neurology Association and current Director of the Pediatric Neuroscience Unit at the “Tor Vergata” University Hospital in Rome, collected peripheral blood mononuclear cells (PBMC) from 33 children with idiopathic ASD and 22 healthy control subjects. “We have identified key components of both pathways that are differentially expressed between ASD patients and healthy control individuals. However, we should take into account the heterogeneity of the patients in order to identify common biomarkers according to the clinical phenotype”, says Eleonora Rosina. For that reason, the expression of the MAPK and mTOR pathways were then analyzed according to the clinical features of the patients.

Their data suggest that components of protein synthesis signalling pathways could be considered as a molecular signature of clinical severity in Autism Spectrum Disorder. A publication validating the approach used to find molecular biomarkers in ASDs as evidence has recently been accepted in the journal of Translational Psychiatry. “We are aware that the term “biomarker” has major implications and a large number of individuals have to be studied before any claim can be made”, states Eleonora. Therefore, Claudia Bagni’s team now hopes to recruit more patients across Synapsy cohorts and collaborations.□

Who is Eleonora Rosina?

Interested in medicine, research and the physiological aspects of the human body, Eleonora Rosina completed a Bachelor’s degree in human biology at the University of Rome “Tor Vergata”. This training, a real bridge between medicine and biology, allowed her to integrate the two approaches.

She then discovered neuroscience during an Erasmus internship in Paris where she worked on Down Syndrome and decided to pursue her studies in this field. She returned to Rome to study neurodevelopmental diseases in mice and humans and obtained a Master’s degree in medical biotechnology, which then opened the doors for her doctorate.

Since 2016 Eleonora has been a PhD student in Claudia Bagni’s group working between the University of Lausanne and University of Rome Tor Vergata, where she studies putative biomarkers of neurodevelopmental diseases.

Working in Lausanne has been for her a great opportunity to discover Synapsy and the patient-oriented research. “In 2018 I attended the annual meeting in Villars as well as the meeting on occasion of the 8th site visit of the NCCR Synapsy review panel in Geneva. I presented a poster which allowed me to meet and discuss our findings with basic scientists  and clinicians. A closer interaction with clinicians and patients is fundamental to better understand the complexity and heterogeneity of the diseases we study. These interactions further galvanized my motivation and commitment to this research which aims at bridging the two aspects of ASD and Fragile X Syndrome: the molecular mechanisms and the clinical features”, she says.□