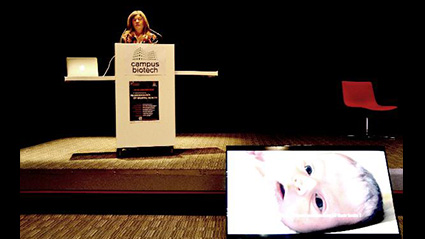 Ghislaine Dehaene-Lambertz was destined to become a pediatrician in a regional medical office, but her curiosity –together with a series of chance meetings– led her to a career as a researcher. And not just any researcher : she is the figurehead of the human brain development research. Her work is part neuroscience and part psychiatry, and belongs to what she describes as cognitive psychology. Synapsy met Ghislaine at the last Neurobiology of Mental Health conference, where she was the principal guest.

Dehaene-Lambertz’s instincts as a researcher began to flourish during her medical internship and her stints in neonatology and neuropediatrics. “We were resuscitating very early premature infants but what did we know about the impact of this hostile neonatal environment on their brains?” she asked herself. Science and medicine in the 1980s knew only a few things about the cerebral development of newborn children. Given this situation –not to mention her own investigations and growing interest in child psychiatry– it was only logical that Ghislaine would cross the threshold of a cognitive science laboratory. “It was a revelation! I discovered questions that I had never been introduced to. How babies manage, for instance, to recognize their mother tongue, or a face, or a name? And how do you ask them these questions?” she says.
The young French-born pediatrician was bowled over by this scientific approach because, as she recalls : “At the time, child psychiatry in France was dominated by the concepts of Françoise Dolto. In other words, if you suffered from a psychiatric disorder during childhood, it was always the mother who was to blame.” Moreover, our understanding of child development in France (as elsewhere) still centers heavily on psychoanalysis. It is an approach that is too narrow for Dehaene-Lambertz, although she does not reject it out of hand : “It’s important to think about the whys and wherefores of the psyche when you look at it in the context of family. On the other hand, when someone says that a child’s dyscalculia is down to the fact that their parents aren’t interested in them as a person, I don’t agree. You have to examine the child to understand how he thinks from the information that is available to him and not from the adult.” It follows that when Dehaene-Lambertz began life as a researcher almost thirty years ago, she was driven by a desire to lay the foundations for our understanding of the nascent human brain.

Doctors such as Ghislaine Dehaene-Lambertz who are involved in research are often faced with a dilemma : do they give up patients to help advance knowledge or do they abandon research in favor of diagnosis? Ghislaine felt this tension between research and clinical work and managed to circumvent it. “When there’s someone sitting opposite you, you don’t listen the same way if they’re a patient or if they’re a healthy individual who is volunteering for research. It is difficult to think at the same time about your role as a researcher and the person you interact with. I didn’t want to neglect patients because of what they could tell me about how the brain functions. So, I very soon decided not to try to wear two hats at the same time and to only do research on healthy subjects.” Nevertheless, Ghislaine has been aiming to return to studying pathologies for over 20 years but : “As long as I don’t know how a six-month-old child learns how to speak, it is difficult to put in place appropriate protocols to understand language disorders and help children who suffer from them.”

Ghislaine Dehaene-Lambertz’s research has shown that newborns possess many innate capacities. It is likely that the extensive neuron networks observed in adults are already in place after six months of pregnancy. In short, a baby’s brain is prewired and signs of cerebral asymmetry are clearly visible, as they are in adults. Ghislaine’s findings clearly call into question the idea that we learn everything from birth. In other words, our behavior is not attributable solely to acquire knowledge. Dehaene-Lambertz stresses that in the great debate between nature and nurture : “The glass is half-full and half-empty. Pre-wired systems are used to make some stimuli –such as faces or speech– more interesting than others so that a baby is actively learning straightaway. The environment will promote (or not) these learning experiences that are partly based on acquired knowledge. The brain of an infant is not made of soft clay that is simply waiting to be shaped!” Among other things, Ghislaine has been able to demonstrate very clearly that frontal activation exists in newborn babies, which is suggestive of voluntary attention and high-level prediction. “It was a genuine surprise! The only difference with adults is that frontal activation is three times slower in babies.”