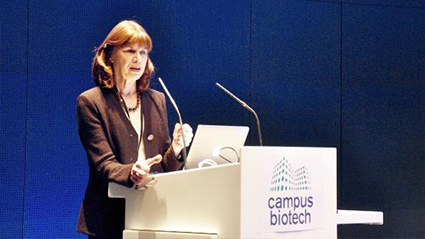 Where does your fascination with the human brain come from?
I was always interested in the brain and in the products of brain functions—cognition, affect and movement. When I was a teenager, I wondered how can one person act in one way and another person in another. I thought it must be because of brain differences and I was curious about how we could look at the brain to really understand behavior. When I went to medical school, I thought that if I wanted to understand the brain and if I wanted to really understand its function, I would have to choose between neurology and psychiatry. By looking at neurology, I realized that neurologists were very concerned about neurodegeneration and that they were taking care of people who were about to die. On the other hand, psychiatrists were taking care of very interesting disorders like psychosis, schizophrenia and depression. It became fascinating to me how the brain would make hallucinations and delusions, symptoms that were so distorted. I choose psychiatry with the goal of finding out about brain pathophysiology that could explain something so behaviorally bizarre as psychosis.

When you started out in psychiatry, what was the understanding of psychiatric disorders?
The picture we had was the brain, a black box, and then the disease. We knew very little about what was in that black box. Over the last decades, our knowledge of neuroscience has just exploded. Of course, the brain is so complex that we still don’t know nearly everything we need to. But we have started to learn a few things and basic neuroscientists are making very important discoveries about how the brain functions. You really need to understand this before you can go back and understand what the diseases of the brain that alter behavior could be.

Today, what is known about psychosis?
I see psychosis as a learning and memory disorder and more specifically as a disorder of memory formation. Brains of psychotic patients are full of memories but they are made in a very odd and unusual ways. In fact, it’s an exuberant memory system from which comes the trouble because patients mistakenly associate things. On the top of several altered brain areas and a hyper-connected brain, the hippocampus, which is important for memory formation, is very abnormal.

What brings you from clinical work to research?
I was interested in basic science from the beginning. It was a bit accidental that I got an MD degree but I was happy with it because it allowed me to discover the clinical determinants of disease and the clinical treatment environments for people with psychosis. There are so many important aspects of human disease that you have to take into account in doing clinically oriented research that I think every research group needs one or two clinicians so that they can be involved in steering the research in a clinically relevant way.
At the time I graduated, I started my research work with a fellowship to do basic science. Once you get the basics of fundamental science information, you have to continue new discovery by yourself to acquire new knowledge. One difficulty is that laboratories doing translational neuroscience have to use many different complex methodologies. I could never be equipped to do well without a lot of very talented collaborators.

What is your translational approach?
We observe the pathophysiology of individuals with psychosis in postmortem human tissue and search for the detailed molecular and genetic mechanisms first in the tissue, then translated to mice; we also use human neuronal precursor cells now in vitro. There are only a few researchers who are currently applying this cellular approach and the methodology is very early. We also do brain biomarker studies in live individuals with psychosis in large patient studies. For most of the patients from our large cohort study, we are collecting fibroblasts and transforming them into stem cells and neuronal precursor cells. We believe having cells from a specific individual would allow us to find out what medications are useful. Our goal is to do personalized medicine in psychiatry.

What do you think about the Synapsy approach which is to bring psychiatry and neuroscience together?
It’s more than a nice, it’s inspiring! Moreover, it is a necessity. This is the transition that cancer, heart disease and diabetes went through. Nowadays, it seems as though we have always known about the science of those diseases but, in fact, we have not always known it. I believe this transformation is what is going to happen with psychiatry. We are going to take people with psychosis and pull out specific diseases and their neurobiological basis. Psychiatrists will be able to understand pathophysiology only by applying basic neuroscience principles. I think Synapsy is truly setting the stage for what needs to be done in the future when psychiatrists, neuroscientists, psychologists and other brain scientists will sit side by side in order to pull together the entire story.