Philippe Conus : “The unexpected plays a part in jazz as it does in psychiatry” 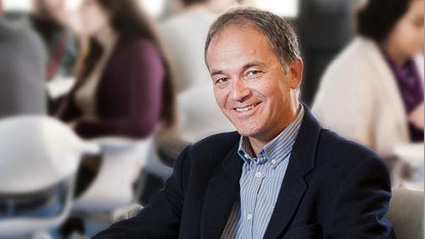 As he receives the Alphen Award for his global clinical approach, Philippe Conus tells Synapsy about the rich and novel path that led him to psychiatry.

Between music and psychiatry

Philippe Conus dreamt of a career as a jazz clarinetist when he was 18, attending a school of classical music in New York. But this year-long experience was not entirely satisfactory : there was no jazz training. Philippe decided to go into medicine instead, where his interest in psychiatry was very quickly satisfied when he performed night shifts and internships to earn a little money. “It was a very literary interest because psychiatry was ever-present in novels,” says Philippe. Even in those early days, the future psychiatrist particularly enjoyed the close patient contact that can be found in psychiatric hospitals. Nevertheless, as he admits, things were complicated –a reference to the challenge of getting in touch with people who are very much out of touch. “It’s the doctor’s personality that is key in forming a relationship; it’s not just a question of technique like it is in surgery.”
After leaving medical school, Conus went back to music and jazz “so that I could know for sure what I wanted to do and in order to acquire a level that would allow me to enjoy playing with others.” This time he left for Boston –the Berkley Jazz School– where he rubbed shoulders for 18 months with future monsters of jazz such as Diana Krall and the saxophonist Joshua Redman (who were both 17 years old at the time). When Philippe himself was all of 26, he was confirmed in his choice to keep music as a hobby when he saw numerous very young kids with extraordinary talent and musical maturity. He returned to Switzerland to continue his career in medicine. Today his love of music –he plays the piano, double bass and saxophone– helps him in his role as a psychiatrist. “First and foremost, it’s all about how you breathe. Jazz also helps me with my psychotherapy, where there’s always the fear that you’re going to make a wrong interpretation. When you make a mistake, you use it to find a way out that works, as you do in improvisational jazz.”

When the interpersonal aspect leads to psychiatry

Philippe Conus has learned how to leave room for doubt when it comes to both psychiatry and music. He experimented with a range of specializations before making a definitive choice : “I started with a year of surgery, because I was afraid that psychiatry is too marginal. The medical part is still controversial and stigmatized, which has an impact not just on patients but also on psychiatrists and students.” Since the elitist environment of surgery did not fit in with Philippe’s values and expectations, he turned to internal medicine : emergency and cardiology. After obtaining an FMH, paths that opened up for him were intensive care, infectious disease or cardiology. “They were branches that left little room for the individual and I missed the relationship side of things.” As a result, Philippe returned to psychiatry.
This was at a time when the CHUV was beginning to form specializations for its psychiatric units, with one specialization for mood disorders, another for personality disorders and a third for schizophrenia, with the latter being particularly attractive to the psychiatrist from Vaud. The different clusters created fields of interest that generated research, to which Philippe devoted himself, starting with tinkering, as he himself admits.
But Philippe’s interest in research predates all this : his initial desire lay in an academic understanding and curiosity in this branch where the causes of schizophrenia were largely unknown. “In the beginning, I organized my clinical research around the question of how to structure patient care. We had to organize a care system that had been very blurred and lacking in rigor, since it was an area very much geared towards psychotherapy.” Conus first introduced procedures that were designed to compare the effectiveness of interventions.

Detailed mechanisms for keeping up with the international behemoths

Philippe Conus left for Australia so he could be exposed to new research horizons. There he discovered the exciting professionalism of clinical research and the breadth of the Australian cohorts through his collaboration with Prof. Pat McGorry in Melbourne. This experience meant that when he returned to Switzerland he was able to set up early-intervention clinical programs and start real collaborations with Kim Do : this was a pivotal meeting for Conus and the development of his clinical research. “We were able to counterbalance our clear deficit in terms of the patient pool compared to Australia or America with our local capacity to study the mechanisms in detail.” Synapsy later brought about a major shift when it helped finance the WP#2 cohort, which now numbers nearly 700 patients.
In addition to its financial support, Synapsy’s clinical scientist positions have created a new generation of researchers and a community of interest, explains Philippe. “The agenda for translational neuroscience research has been extended, and we have been able to teach neuroscience from the third year of medicine and in the psychiatry training. This attracts candidates and is a real driver for research in the field of psychiatry.”

A clinical approach that has been rewarded

Conus was the recent recipient of the Alphen Prize, which recognized his work in various areas : his efforts to establish clinical research programs in his institution; his advocacy for including neuroscience training in the medical curriculum; and his own research in schizophrenia. In spite of this prestigious award, the bottom line for Philippe is the impact that such prizes have internally on the cause of clinical neuroscience. “The deanship now acknowledges our psychiatry research, and that’s important because we have had to fight really hard over the years to gain institutional recognition.” Conus also admits that there is something flattering about winning such an award but steers clear of any complacency : “It’s not just about me, this prize rewards the type of research we do and helps move things forward, and, at the end of the day, that’s what is important.”