Is everything decided in childhood? 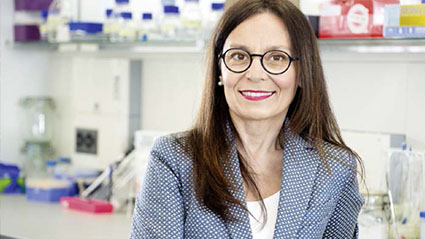 Meeting with Claudia Bagni, Head of the UNIL Department of Fundamental Neuroscience, whose inaugural lecture will take place during the Brain Awareness Week 2017 (program pdf).

Without knowing why, it is often said that everything is decided in childhood. Claudia Bagni‘s research shows how, but also illustrates the risks, throughout life, of losing preciously preserved connections during neuronal maturation. Why is she interested in being a fundamental researcher on the youth of the brain? Because of the synaptogenesis, which begins in the fetus and continues actively between 2-3 and 10-12 years old, when connections multiply to the point of requiring pruning work to eliminate unnecessary synapses and consolidate others. More than a hundred genes are involved in this intense neuronal work, and Claudia Bagni focuses on a group of them coding for proteins essential for the maturation of nerve cells and the functioning of synapses.

Among these proteins whose lack (or mutation) causes various neurological problems: the FMRP, which the absence of causes the most frequent form of inherited intellectual disability, the fragile-X syndrome. In these children, intellectual retardation will become more and more visible over the years. Similar mechanisms affecting the structure and functioning of synapses are also deteriorated in autism, schizophrenia, epilepsy, Alzheimer’s and cancer. The links, still partially mysterious, between these diseases are verified various ways: for example, many fragile-X people are prone to epilepsy, or the fact that these patients develop cancer less often than the general population.

Research led by Claudia Bagni aim to enlighten the molecular paths identical borrowed by these different synaptopathies. “It’s intriguing to think of the parallelism between the development of the brain as early as the fetal period characterized by the production of neurons, their migration and their differentiation and progression of the cancer based on cell migration and their colonization of organs”, she says.

Arrived at UNIL January 2016, the Italian researcher moved her laboratory in October. With her international team, she studies the effects of the absence (or mutation) of genes related to neurodevelopment and of the environment on sociability of Drosophila and mice, about their brain activities and even their sexual relations. The differences between wild and mutated animals sadly jump in the eyes: the first focus their attention, come alive to the presence of their congeners, multiply the exchanges while the latter seem to wander in a meaningless environment. Thanks to the magnetic resonance adapted to the size of a mouse (asleep), researchers can for example observe the different way in which the area of the brain concerned by the gene involved in autism is activated, in absence of this gene. Discoveries discussed with clinicians. If the gene is absent, can we perform differently and correctly the synthesis of protein necessary for the proper functioning of the brain? The study of the environment’s influence on the neuronal functioning from the beginning of life and even intrauterine must be done. The connections of “synaptogenesis” can be lost or reinforced depending on what we breathe, consume, absorb, according to the human exchanges that are proposed to us, the life that is offered to us and what we do about it.

The goal is to provide physicians with support in understanding synaptopathies and finding new treatments. “I came to work in Switzerland especially for the possibility of improving therapies thanks to a close synergy between the fundamental, the clinic and the pharmaceutical departments. We cross clinicians’ observations with those we make in our laboratory on our biological models, and I find a lot of inspiration and motivation in the clinical stories of patients”, concludes Claudia Bagni. Thus she has started several collaborations with specialists in certain diseases at UNIL-CHUV.

Claudia Bagni has just initiated an institutional arrangement for the exchange of students and professors in biology and medicine with the University of Rome Tor Vergata.