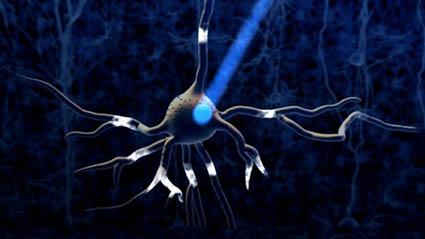 Borrowing ideas from optogenetics, which uses light to control neurons, Christian Lüscher and colleagues have developed a combination therapy to treat cocaine-induced behaviors in mice.

Recent research has shown that it may be possible to use optogenetics to reverse cocaine-related behaviors such as increased running and searching in mice, but the techniques are still too difficult to use in humans. Other therapies such as deep brain stimulation, which sends electrical impulses through specifically identified small areas of the brain, have been used in humans to treat other neurological and psychiatric conditions on a temporary basis.

In their experiments with mice, Christian Lüscher and colleagues at the University of Geneva (Addiction lab >) adjusted deep brain stimulation to mimic optogenetic therapy, activating a set of glutamate receptors that help to “erase” the remodeling that cocaine performs at certain neural synapses. The researchers used low-frequency deep brain stimulation in combination with a drug that blocks certain dopamine receptors to produce a long-lasting optogenetic-like effect that reduced cocaine-related behavior in the mice.