The brain, a mirror of the mother’s trauma 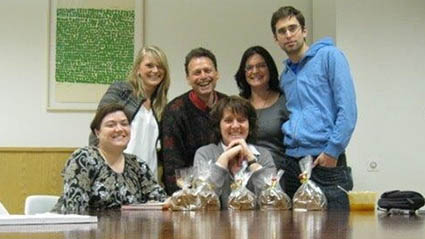 Previous studies have shown it is more difficult for mothers suffering from post traumatic stress disorder (PTSD) related to a history of violent life events to react appropriately to their child in moments of stress (for example separations, conflicts, new and frightening events). In an article just published in the journal Frontiers in Psychology, Professor Daniel Schechter and his group now link these observations and other findings to provide a mechanistic picture of maternal neural activity in parenting in the face of early life stress and PTSD.

“Our work focuses on violence-related PTSD, parental stress and neuronal activity as predictive factors of the mother-child relationship The gene, NR3C1 coding for the glucocorticoid receptor plays a central role in the dysregulation of the hypothalamic-pituitary-adrenal (HPA) axis, seen in mothers who have been subjected to a history of violence from early childhood and go on to develop PTSD. Our hypothesis is that the degree of methylation of the NR3C1 gene is negatively correlated with maternal violence-related PTSD severity on the one hand and on the other, positively correlated with neural activity of an area showing significant relationship to parenting stress: the medial prefrontal cortical (mPFC). Finally we wanted to test the hypothesis that all these effects will impact on the child” explains Daniel Schechter, Professor at the Neuroscience Center of the University of Geneva. “And we actually find that mother–child interactive behavior measured by child cooperativeness in play is significantly and positively correlated with NR3C1 methylation and neuronal activity in the mPFC” he continues. To our knowledge this is the first published report linking several psychobiological domains leading to maternal endophenotypes that might contribute to risk to the early mother–child relationship: namely methylation of the glucocorticoid receptor gene NR3C1 and decreased activity of the mPFC associated with increased parenting stress and lower child cooperativeness in play.

45 mothers and their children aged 12 to 42 months participated in this study. The mothers were all volunteers recruited by flyers placed in community and care centers or domestic violence shelters. The behavioral protocol had several steps to create a relationship with the mother. After a first interview without the child mothers were invited to bring along their children 1-2 weeks later and mother and child were observed when faced with routine daily interactions such as separations and reunions or when exposed to novelty, for example appearance of a masked clown. Scientists observed children’s reactions as well as combined mother-child reaction interactions. Consenting and eligible mothers were scanned by MRI by Dominique Moser “What’s fascinating is that dysregulation of the limbic system is a true mirror of the dysregulation observed in mothers and between mother and child” adds Daniel Schechter. This study was also carried out in collaboration with Alexandre Dayer from the Neuroscience Center of the University of Geneva and Ariane Paolini-Giacobino from the Department of Medical Genetics and Development, Geneva University Hospital.

A therapeutic intervention based on Video-feedback Exposure Sessions to improve the relationship between traumatized mothers and their children is underway.
The researchers would like to monitor the maternal biomarkers described in this Frontiers paper (low NR3C1 gene methylation status and low mPFC activity) for potential changes after treatment with this novel technique. Sandra Rusconi Serpa, co-principal investigator plans to put the therapeutic intervention to the test in 2016.