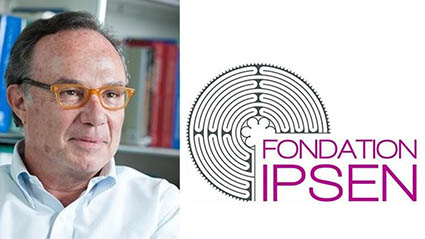 The 2016 Neuronal Plasticity prize is awarded jointly to Professor Pierre Magistretti, and another two world-renowned scientists, Professor David Altwell from University College London, and Professor Marcus Raichle from the Washington University School of Medicine, for their discoveries in the field of neuroenergetics.

Professor Magistretti’s research focuses on the cellular and molecular mechanisms of brain energy metabolism. His lab has identified the mechanisms by which neuronal activity is coupled to the delivery of energy to active neurons. In particular he has revealed the role of astrocytes, a type of glial cell, in this coupling as they can sense glutamate-mediated synaptic activity and provide energy substrates to meet the demands of neurons. This work has a significant impact in functional brain imaging because it provides the cellular and molecular basis for understanding the signals that this group of imaging techniques detect.

Another aspect of Professor Magistretti’s work is the connection of neuronal activity to synaptic plasticity over hours or days, which is thought to underlie learning and memory. His lab is currently pursuing the cutting-edge field of “metabolic plasticity”, where metabolic adaptations among glial cells occur in connection with the functional and structural changes of synaptic plasticity. In this context the work of Pierre Magistretti has characterized little-known aspects of neurotransmitter-regulated energy metabolism, e.g. glycogen mobilization in astrocytes triggered by neuronal activity and demonstrated the role of glycogen-derived lactate in neuronal plasticity and memory.

Professor Magistretti also heads a lab at the King Abdullah University of Science and Technology (KAUST). In early 2015, the group, working with his lab at EPFL, published a seminal paper in PLOS Computational Biology describing the first computer model of metabolic coupling between neurons and glial cells. The model is now being integrated into the brain modeling efforts developed by the Blue Brain Project at EPFL.

The prize includes a shared monetary award of €60,000 and will be awarded at the 10th Forum of the Federation of European Neuroscience Societies on July 5, 2016 in Copenhagen. The winners will also deliver 35-min lectures on their fields of research.

The Fondation IPSEN was created in 1983. Its mission is to track progress in biomedical research in order to highlight fundamental advances and identify emerging knowledge and new paradigms. In particular, IPSEN focuses on interdisciplinary knowledge and cross-pollination.