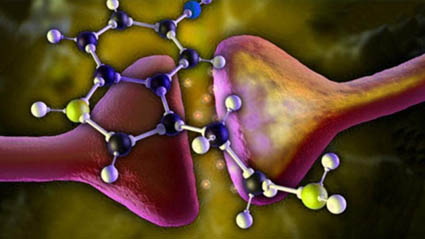 In a study of infant mice, researchers have found that the positioning of brain cells is affected by early-life impairment of the system that regulates serotonin — a key brain chemical targeted by antidepressants and known to regulate mood.

Like all neurotransmitters, serotonin is released from certain brain cells in order to be absorbed by other neurons. The most common antidepressants work by preventing the released serotonin from getting recycled, to combat what are thought to be too-low levels of serotonin among people with depression and other psychiatric conditions.

These antidepressants limit the activity of a protein —called SERT— that recycles serotonin. In this study, however, researchers focused on negative effects of blocking SERT early in the lives of mice. Led by 2009 NARSAD Young Investigator grantee Alexandre G. Dayer, M.D., of the University of Geneva Medical School, and first author Dr. Sarah Frazer, of the same institution, the team reported its findings online September 22 in Translational Psychiatry.
The researchers studied three groups of infant mice: one group genetically modified to have inactive SERT proteins, another group exposed to the antidepressant fluoxetine (brand name Prozac) while still in the womb, and a final control group. Since previous research has suggested that serotonin influences the migration of brain cells — nerve cells at the dawn of life traveling to correct parts of the brain to perform their functions — this study examined how SERT deficiency affects that migration.

Compared to the control group, the young mice without SERT proteins and exposed to fluoxetine showed faster cellular migration. Both groups also showed dysregulation of genes involved in cellular migration — 58 genes in the mice without SERT, and 221 in the fluoxetine-exposed mice. The latter animals may have experienced a broader range of effects because the medication targets other proteins in the brain besides SERT, the researchers noted.

The researchers also reported unique effects on the position of interneurons, most of which play a key role in inhibiting “excitatory” circuits. Among both mice lacking SERT and those exposed to fluoxetine, they found that specific interneuron subtypes were distributed abnormally within superficial layers of the cortex.
Although pertaining to mice, the researchers say, these findings may have clinical relevance for people, given that antidepressants like fluoxetine can be transmitted from human mother to child, which some research has suggested can have behavioral effects. But the investigators caution that more work is needed to understand SERT’s role in early development, especially given that maternal depression may affect children’s biology in other ways, apart from the activity of the SERT protein.