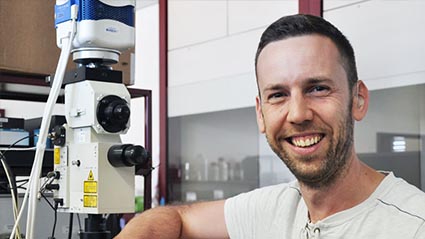 Thomas Marissal was born in Carpentras, France. He holds a bachelor’s degree in biology and a master’s in neurobiology from the University of Aix-Marseille. Thomas subsequently completed a doctoral thesis under the supervision of professors Yehezkel Ben-Ari and Rosa Cossart before moving to Switzerland and the laboratory of the late Dominique Muller and Alan Carleton.

What did you demonstrate during your thesis?

What are your career plans?

Academic research is clearly my career goal: it gives you creative freedom and means you can make a small contribution to the sum of knowledge and do something new. And, on a selfish level, it’s really exhilarating! As well as the exploratory side, it’s true that a researcher’s work is useful, and I like it. I realized over the years that some patients were combing the scientific literature to find out about their pathology, which means we are all the more responsible to them and makes us feel useful.

Do you want to go in the direction of clinical work?

Nowadays, I don’t see myself working with anything other than a subject that has clinical potential, no matter how small. Of course, I can’t go towards clinical because I am not a clinician, but I would like to move as far as possible to the preclinical level and keep as many interactions as I can with hospitals.

Did this desire come to you thanks to Synapsy?

Yes, exactly, it did. And it’s something I’ve realized increasingly since working in a more pathological context with the 22q11 project. The interactions that Alan Carleton’s group have with the 22q11 cohort and Stephan Eliez are fantastic. In the future, I would do anything to have that kind of interaction.

What do you think of Synapsy’s approach to bringing psychiatrists into neuroscience?

This is important but the two areas shouldn’t be confused. Basic biology is at the service of the people working in the field: caregivers and doctors. There is a clear and natural directionality towards medicine. It’s obvious that, if we can cure a disease, knowing the basic mechanism is useless. On the other hand, if there is no treatment, knowing a mechanism to find a drug is absolutely essential. Maybe we need to build bridges so that “fundamentalists” are more in touch with patients or patient associations, without turning into medical doctors