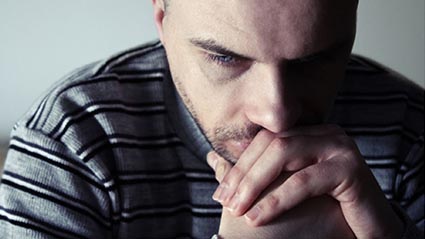 People in French and Italian-speaking parts of Switzerland are nearly twice as likely to feel depressed as those in German regions, according to a report.

Residents of the cantons of Vaud and Ticino are most likely to suffer from feelings of depression, at 10.1 percent and 9.4 percent respectively, said Le Matin Dimanche on Sunday. On average, 8.9 percent of people in French and Italian-speaking regions suffer from depression, compared with just 5.5 percent in German-speaking Switzerland, said the paper, basing its report on the results of a 2012 federal Swiss health survey.

While no official body has explored why this mental health Röstigraben exists, the paper suggests it could be explained by various factors including population density, unemployment rates and cultural differences between language regions. The federal study shows that people in urban areas are more likely to feel depressed than those living in the countryside, said the paper. Since French-speaking cantons have proportionally more urban areas than Swiss German regions, that could be one explanation why more people there suffer from depression. Stress may be another. Both unemployment and divorce rates are higher in French and Italian cantons than in Swiss German regions, said the paper, with both proven to correlate with higher levels of depression.

However attitudes towards identifying and reporting mental health issues may also play a role. People in French-speaking areas go to the doctor slightly more frequently than Swiss Germans, said the paper, while depression is probably more of a taboo subject in German-speaking regions. “I think that francophones are more likely to say when something’s wrong,” psychiatric doctor Martin Preisig of Lausanne’s CHUV hospital told the paper. “They are better at identifying their own emotions. Don’t we say that the French are moaners? German-speakers are perhaps more conservative.”