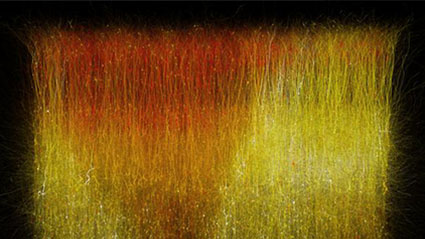 In a collaboration led by EPFL’s Blue Brain, scientists discover patterns of brain activity – never before observed – with the help of mathematics, providing insight into how neurons collectively process information.

Brains of healthy rats that are the same age share many features, such as similar numbers and types of neurons present in the six layers of the cortex. But how do neurons exchange information? Which neurons are activated? How does this change with time?

To answer these questions, a team of scientists led by EPFL’s Blue Brain Project used the mathematical language of algebraic topology to describe just how rat neurons connect to each other – and respond to stimuli – providing the first geometrical insight into how information is processed in a rodent brain. The results are published 12 June 2017 in the open-access journal Frontiers in Computational Neuroscience.

“Our previous mathematical approaches struggled to make sense of the activity generated by neurons,” says EPFL neuroscientist Henry Markram who leads the Blue Brain Project. “When we map the activity into high dimensional geometries the activity starts to make sense – this exciting collaboration has opened a completely new door to understanding the brain. ”