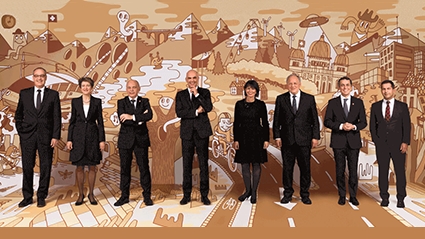 The NCCR-Synapsy played a key role in this initiative by the Swiss Federal Council, with two of its PIs –  Prof. Marie Schaer and Prof. Stephan Eliez – coordinating the research project which proved the efficiency of early intervention on a Swiss multisite. Moreover, out of the six pilot centers, two are located in Geneva, under the direction of Prof. Stephan Eliez.

People with autism spectrum disorders must be able to attend school and learn a job. At its meeting on 17 October 2018, the Swiss Federal Council adopted a report which provides for various measures to this end. They are based on continuous support and the rapid completion of a correct diagnosis. Increased coordination should also allow for a more efficient use of the financial resources available.

The Swiss Federal Council (SFC) intends to encourage people with autism spectrum disorders (ASD) so that they can participate as fully as possible in social life. To this end, it has set three priority areas for intervention: early detection and diagnosis, counseling and coordination, and early intervention.

Early and correct diagnosis by specialists allows appropriate incentives to be provided. Avoiding misdiagnosis also prevents inappropriate treatment. Once the diagnosis has been made, the families concerned must obtain advice and support. The various processing operations and other offers must be coordinated. Especially for difficult transitions, for example from one school level to another, from school to vocational training or for entry into working life, it is important that people with ASD are supported as much as possible by the same person, in order to ensure continuity and avoid failures in the world of work or job losses.

Recent research indicates that intensive early treatment is the most promising for young children with autism. Comparisons with other countries show that intensive therapy at an early age not only leads to better integration, but also reduces the burden on the public authorities.

To achieve the objectives, it is important to take into account the multiple possible manifestations of the disease. It is also necessary to take into consideration the situation that Switzerland is currently facing with many different actors at cantonal and municipal level, a medical density that varies according to the regions, a diversity of structures and a general lack of appropriate services.

The SFC’s report indicates in which areas the Confederation, the cantons and the service providers are primarily responsible and which measures they should implement. It invites the cantons, municipalities and all relevant actors to take stock of the current situation and to encourage the implementation of concrete measures on the basis of this report.

At the same time, the SFC instructed the FDHA (DFI – Département fédéral de l’intérieur) to contact the cantons and initiate the implementation of measures falling within the Confederation’s competence. On the one hand, the emphasis is on joint financing of intensive early intervention by the cantons and the Disability Insurance (AI – Assurance Invalidité). The SFC relies on the research report “Evaluation of the effectiveness of intensive early intervention methods for the treatment of childhood autism”, which is published at the same time as this report. In addition, an FSIO (OFAS – Office fédérales des assurances sociales) pilot project, “Intensive Early Intervention for Children with Autism in Children”, will further develop the lessons learned in this report and resolve outstanding issues. On the other hand, it is necessary to promote the vocational training of the persons concerned and their integration into the labor market. This approach is also encouraged in the context of the reform “Continuous Development of the Disability Insurance”.

This report is based on a first study, “Autism and Pervasive Developmental Disorder. Overview, assessment and prospects”, prepared in response to postulate 12.3672 of the Councillor for States Claude Hêche, and gives concrete form to the recommendations formulated therein.

People with autism spectrum disorders (ASD) perceive their environment differently than most people. They have great difficulty feeling other people’s emotions and communicating adequately with them. They also have difficulty recognizing the mood of their interlocutor from facial expression. They tend to avoid contacts and become passionate about a particular field. This makes it very difficult for them to understand their environment as a meaningful whole, to develop social contacts and to learn successfully.

ASDs are pervasive developmental disorders that often appear in early childhood and persist throughout life (e.g., childhood autism, Asperger’s syndrome or atypical autism). The disease can manifest itself in very different forms and to different degrees. Some people with autism can communicate verbally and lead more or less independent lives; for others, life is made more difficult by mental retardation, highly stereotypical behaviors or diseases such as epilepsy, ADHD or behavioral disorders.