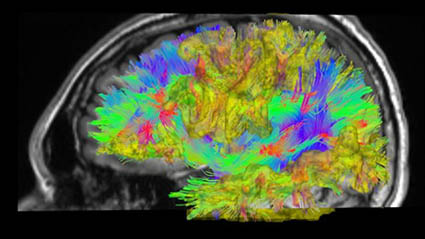 Analysis of the structural connectivity in the brains of 16 schizophrenia patients reveals several zones affected by the disease and their reduced network connectivity.

The brain of a schizophrenia patient shows changes in network connections compared to the brain of a normal individual. That’s what scientists from the EPFL, observed after comparing the topography of affected brain regions and structural connections in a group of 16 schizophrenia patients with a group of 15 healthy individuals. Their results were recently published in the journal Human Brain Mapping.

“The difficulty with schizophrenia is that it doesn’t seem to produce localised lesions but rather has a highly distributed aspect of neural abnormalities and connectivity deficits,” points out Alessandra Griffa, from the Signal Processing Laboratory 5 (LTS5) and first author of the paper. To identify affected brain networks, the scientists and their collaborators from the Department of Psychiatry at the CHUV, use a magnetic resonance imaging (MRI) technique called diffusion spectrum MRI. This allows the diffusion of water in the brain’s white matter to be mapped tracing fiber bundle trajectories between different brain areas. In other words it allows them to map the connectome: the brain’s web of connectivity.

The comparison between healthy and schizophrenia brains shows for the first time that in the latter, 26 regions are affected meaning that about 30% of the brain nodes in the entire cerebral network are compromised. Affected areas are found in central as well as peripheral areas and include the frontal-parietal zone, an area involved in cognitive processes. “Even so, we can’t infer a clear association between the affected areas and for example the cognitive problems observed in schizophrenia disorder”, specifies Alessandra Griffa.

White matter alteration
The scientists were also able quantitate and characterise white matter structure (nerve fibers) and myelin (an insulator of nerve fibers, necessary for proper signal transmission). In afflicted brain areas of schizophrenic patients both these are modified resulting in less efficient nerve fibers connectivity. In effect, to get around damaged areas, connections need to find other paths, usually longer and thereby less efficient. The connection network then is decentralized in patients with the disorder compared to healthy individuals. For the scientists these structural alterations and the decentralized topology of the affected areas could be major mechanisms underlying schizophrenia disorder.