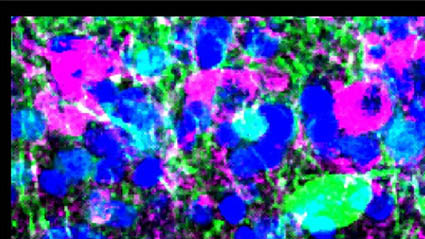 A study published in the latest issue of Nature Neuroscience describes work led by the University of Geneva’s (UNIGE) Faculties of Medicine and Sciences, on the indisputable role of the olfactory bulb in mammal brains’ ability to discriminate between smells.

This research has verified the importance of a very active neural network, which cuts, prunes, and models the sequence of electrical impulses that result from information transmitted by the nose. Although the interpretation needed to distinguish between different smells takes place in the cortex, this step is greatly facilitated by the work done by the bulb neurons who put together the information to be read. From a behavioral perspective this concerns the learning process since the brain is better at learning and recalling what it can clearly differentiate.

How does the brain go about differentiating between two very similar stimuli in order to better learn them? By closely studying the sense of smell, a group of neuroscientists has broached this question and completed a study on the way the brain works when the nose is presented with two very similar perfumes. They concentrated on the first step of the process which starts with the sense of smell and ends with a gain from an ethological or behavioral perspective: from the smell to the data learned and memorized, there is a world within which certain neurons, organized in a network, get involved in order to make learning possible.

Translator bulb
For any sensory stimulus, the neuron receptors generate patterns of activities that are specific to that stimulus, and which are the neurological translation of what the sensory organs have collected. More specifically, these patterns are constituted of electrical impulses which are themselves transmitted and then translated at the cortex level. Thus, just like the eye’s retina is equipped with photoreceptors that translate light into electrical sequences, the nose captures the nuances of an odor before the olfactory bulb, in the brain, gets involved.
Although it is clear that similar smells which induce similar patterns of electrical impulses can be differentiated, the brain mechanisms that makes these distinctions and separates the activity patterns remain unknown. UNIGE research, co-led by professors Alan Carleton and Ivan Rodriguez, explains the phenomenon as well as the olfactory bulb’s main role. The latter in fact sculpts, like an artist, or reformulates, like a translator, the raw information that it receives and when it comes to very similar odors, this information leads to confusion.

In a single sniff
By patiently varying the ratios of fruit aromas (kiwi, strawberry, and banana) in precise combinations, the researchers observed the olfactory bulbs in mice and concluded that the activity patterns, those sequences of electrical impulses, differed depending on the combinations that were presented to the rodents’ noses. Although it seems logical, this phenomenon had never before been scientifically observed. But it gets stranger: «The bulb’s network, the first cerebral channel in the olfactory path generates transformed information whose differences are underscored,» explains Alan Carleton, before adding that, «this translation operation takes place in a fraction of a second, in a single sniff.» The change in representation takes place at lightning speed and the sculptor neurons re-work the activity patterns differentiating and removing electrical impulses. They are also able to diminish or slow down the sequence of electrical impulses, meaning transforming it in time.

Clear designs lead to clear distinctions
The more the bulb separates, sorts and distinguishes the more the animal at hand learns to differentiate between odors and identify each distinction. With these results, professor Carleton says, «We see, on the one hand, a demonstration of the neural competence in certain networks that specialize in separating representations and on the other hand, of the causal link that exists between the ability to make distinctions and the learning performance.»