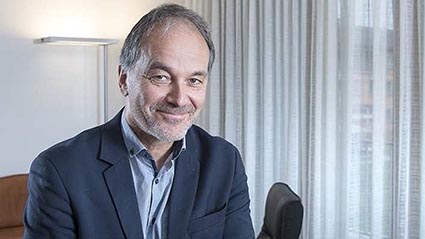 This prize, awarded by the Academy of Sciences (Institut de France), rewards the global approach, both clinical and research, aiming at early detection of psychotic disorders implemented by Prof. Conus into the Department of Psychiatry.

The Philippe & Maria Halphen Foundation was created in 2013, under the aegis of the Academy of Sciences, by Maria Halphen. It aims to support research in the field of mental illnesses, to accelerate the sharing of knowledge on this topic and to inform the population in order to change the perceptions of these pathologies.

The Halphen Science Prize for neuropsychiatric research on mental illness rewards every year a European French-speaking researcher who has contributed to highlighting new ways or new therapeutic tools for the patient.

“The 2017 edition salutes the work of Prof. Philippe Conus, Head of the General Psychiatry Service of the CHUV, in particular, its global approach, both clinical and research, aimed at the early detection of psychotic disorders.”

Extract from the foundation’s press release: “The prize is awarded to Philippe Conus, author of 265 scientific publications. In the continuity of his stays in Melbourne, he has developed specialized programs for early intervention and care for patients suffering from a first episode of psychosis or bipolar disorder, in close collaboration with the Center for Psychiatric Neurosciences. His work has resulted in leading clinical research publications in psychiatry. Moreover, they have made it possible to objectify the benefits of N-acetyl-cysteine (NAC) on negative symptoms as well as the cognitive disorders of schizophrenia, symptoms resisting to usual care and being the main handicap of the disease.

A clinical program for an early treatment to psychiatric disorders

From a clinical perspective, since 2004, Prof. Conus and his colleagues (doctors, nurses, social workers and psychologists) are the initiators of an approach aiming to promote an early detection of patients with early psychosis and to strengthen their commitment to care, giving them access to specific treatments as soon as the first symptoms appear. This helps improve their daily lives and limit the evolution of the disease.

To this end, the TIPP program (Treatment and Intervention in the early phase -Précoce- in Psychotic disorders) was set up and since 2004 more than 600 patients have been treated for a duration of 3 years. In addition to patients, it also targets health professionals by providing them with material to assist them in their work. Several clinical research projects are also conducted in this context, with the aim of improving the supply of care and identifying subgroups of patients with specific needs.

This program works in close collaboration with mobile-psychiatry-teams (intensive follow-up in the community), composed of doctors, nurses and social workers, who offer care directly in the patient’s environment in order to facilitate their access to care.

The approach of Prof. Conus also focuses on translational research projects, which aim to synergize clinical psychiatry and neuroscience. These works, which are carried out within the framework of a close collaboration between the General Psychiatry Service and the Center for Psychiatric Neuroscience led by Prof. Kim Do Cuénod as well as in the framework of international collaborations, aim to identify biomarkers of psychosis. The goal is to be able to detect them in people before the disease has developed and then be able to act preventively.

Clinical studies are also conducted to find new treatments, for example, N-acetyl-cysteine (NAC) given to patients who have recently developed psychosis, and whose results are promising.